That is all it took for the extremists in the North Carolina legislator to craft HB2 to overturn the city of Charlotte’s LGBT non-discrimination law and include an anti-trans bathroom measure to up the awful quotient.

Here is what the law does:

Despite businesses and corporations like Red Hat, Biogen, Dow Chemical, and others coming out in opposition, the bill passed the NC House by 83 to 25 (the yes votes include 11 Democrats) and 32-0 in the Senate after all the Democrats walked out. At around 10pm that same night, North Carolina Governor Pat McCrory signed it into law.

The special session cost North Carolina around $42,000 and that is before costly legal challenges begin (it is likely the bill violates Title VII of the Civil Rights Act and Title IX of the Sex Discrimination in Education).

I’ve already had someone respond to a post I made asking why don’t I just move. They wanted to know what’s keeping me from leaving the South to her backward thinking and hateful laws.

Not only is this my home but the ones who would gladly use their bible and their bigotry to discriminate need me here.

As a mature Caucasian woman of progressive beliefs, living in an island of blue in the sea of red which is the great state of Louisiana, it is vital that my voice be raised to say #NoHateInMyState 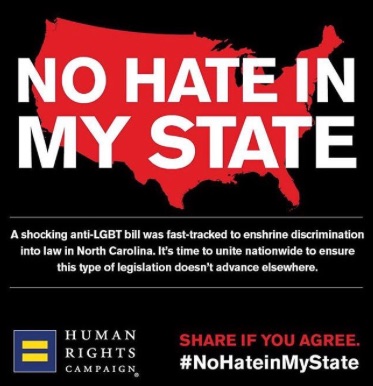 Those who care about the future we’re creating need to stay and work on making things better. Get involved if you don’t like what you are seeing/hearing. Fight for what we know is right.

And, even more importantly, we must vote! Our vote is our voice. Vote in all elections and not just in Presidential ones.

Because in the final analysis, the only questions that matter are the ones asked by John Lewis:

Check out this cool trailer for the Women in Sports Anthology:

Women in Sports is published by Regal Press and is scheduled to be released in April. 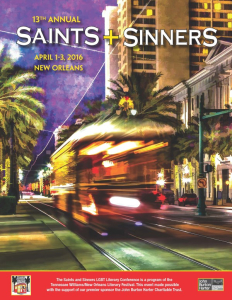 The 2016 Saints and Sinners Festival is scheduled for Friday, April 1 through Sunday, April 3 in New Orleans.

The Festival was founded in 2003 as an innovative way to disseminate HIV/AIDS prevention messages via the writers, thinkers and spokes-people of the LGBT community as well as to bring the LGBT literary community together in celebration.

I will be giving a reading from my new book, Bitter Heart, and will be on a panel. Info for my appearances is below:

Saturday, April 2 @1 PM
CREATURES OF THE NIGHT
If writers are supposed to “write what you know”—how do you create supernatural beings like vampires and werewolves and witches, oh my? Can you make up your own rules, or do you have to follow in the footsteps of those who have gone before? Join us as we talk about redefining the field of paranormal fiction, and the difficulties LGBTQ writers face as they work to get their voices heard.
Panelists: N.S. Beranek, ‘Nathan Burgoine, Mary Griggs,
Jerry Rabushka, and Jeffrey Ricker.
Moderator: Candice Huber.
Hotel Monteleone, Royal Salon C

I hope to see you there!

On Saturday, the Louisiana Presidential Primary will be held. It is very important as not only are state party officials on the ballot but the 51 pledged Democratic delegates and 43 pledged Republican delegates for president will be determined on March 5th. Learn more about the value of your primary vote here.

Check out the 2016 Presidential Preference Primary information sheet from the Louisiana Secretary of State’s office.

During this busy campaign season, review this handout on How to Pick A Candidate from the League of women voters

Visit GeauxVote.com for polling place, ballot and other election information. Or, if you’re not opposed to strong language, you can find your polling place here.

The Independent Women’s Organization has a number of members running for Democratic party positions. Check out their list for suggestions on who to select on Saturday.

On election day, the Krewe of Hillary will be doing campaigning and phone banking for Hillary Clinton at the Hillary for Louisiana Office at 1516 Thalia Street. Here is the Facebook event information.