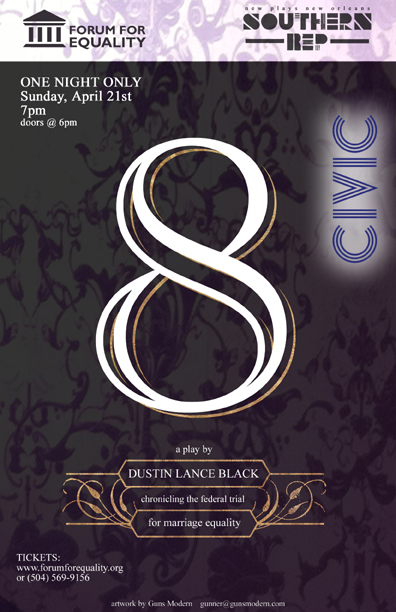 One of the organizations I work a lot for is Forum For Equality. With hard work from former Foundation Board Chair, Marc Behar, and the Executive Director, Sarah Jane Brady, (among others) we were able to get Academy Award winning screenwriter Dustin Lance Black to come out for a a staged reading of “8.” It is about California’s Prop 8 trial and includes courtroom testimony, journalist records and media interviews that he wrote after the anti-marriage advocates appealed the decision of Judge Vaughn Walker to the Supreme Court.

As Dustin Lance Black has said about this project: “This play is a community outreach project. I hope it’s entertaining and compelling, but it’s meant to bring individuals together, to get conversations started. I want ‘8’ to build on the essential storytelling effort of individual gay and lesbian people who have come out about the impact of discrimination in their lives. This is a movement built on storytelling. We get closer to victory every time someone comes out at home, at work or at church.”

The production featured a local cast and was performed in the freshly renovated Civic Theatre. Not only was this a great fundraiser for the Forum and other beneficiary organizations but it was a great teachable moment as a lot of local media covered the one night only event.

Gambit even made it a pick of the weekend: http://www.wwltv.com/eyewitness-morning-news/Gambits-picks-for-the-weekend-418-47-203610741.html

After the show, Dustin came out for a talkback with the audience. He was pretty inspiring, even with the acknowledgement that Louisiana is not the most enlightened place to live, especially for the LGBT community, but for anyone interested in equality and justice. Here is a picture of him answering a question, with the cast in the background and Bryan Batt. 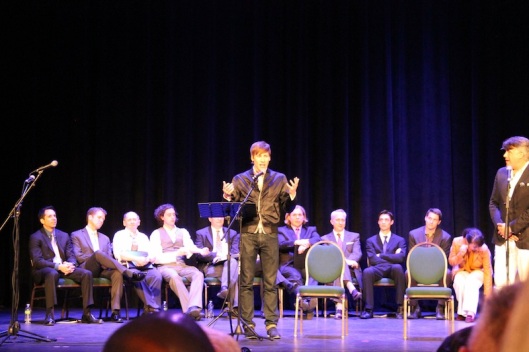 I was very lucky to have brunch with him prior to the event at Arnaud’s Restaurant in the French Quarter. Here is a link to my food blog where I wrote up about the meal and a picture of me with Dustin. I think he enjoyed the meal, too! 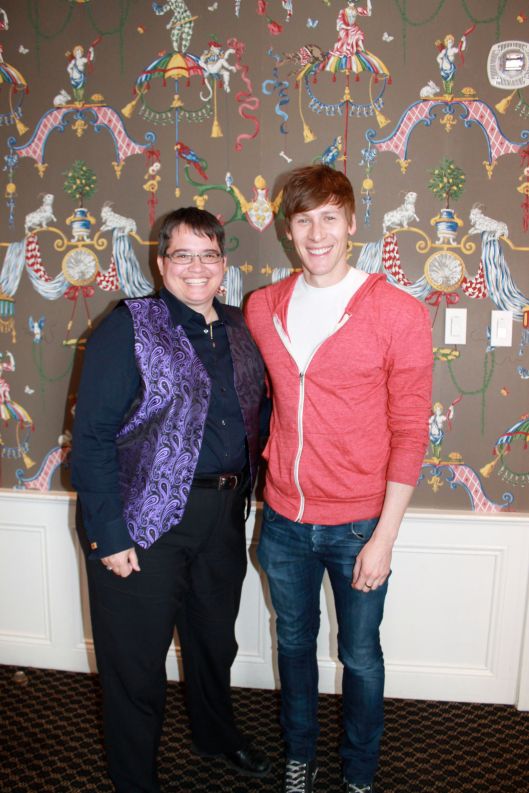 Mary Griggs on Receiving a Louisiana Legends Award from EQLA

My name is Mary Griggs and I now have proof in my hand that I am more than a legend in my own mind.

At the 2nd Annual Louisiana Queer Conference, I was presented with the Equality Louisiana Legends Award. It is a humbling experience, not just because of the other people honored that day included Louisiana Democrats Executive Director, Stephen Handwerk; president of People Acting for Change and Equality, Adrienne Critcher; transgender activist and PFLAG Board member, Courtney Sharp; and PLFAG New Orleans Director and member of the National PFLAG board, Julie Thompson. Matt Paterson was recognized as a SPECTRUM legends at the same ceremony.

It was a humbling experience because I never sought to be a legend. I have just tried to do the right thing where ever I was.

When I worked on my first political campaign (trying to defeat Jesse Helms in North Carolina), I was just trying to get a racist misogynist out of Congress. When I marched on Washington (1989, 1991, 1993, 2000 and 2004 ), I was just there in solidarity with other women and queers. When I went to the state capital to testify, I was just focused on making positive political change.

When I moved to Louisiana in 2002, I was pretty appalled. I had taken so much for granted while I lived in the San Francisco Bay Area. Outside of New Orleans, with their Human Rights Ordinance protecting residents from housing, employment and public accommodations discrimination, there were few protections for folks like me.

I felt alone so I joined a number of groups working to make this state a better place – for women (NOW and IWO) and a better place for lesbian, gay, bisexual, transgender and queer folks (LGBT Community Center, Forum For Equality).

Through those groups I came to realize that we have many resources for progressive change in this state. We might feel isolated by the sheer amount of hate directed our way by politicians and religious extremists, especially during the Marriage Amendment fight of 2004 when 78% of Louisiana voters cast a ballot against equality. I know I am not alone, though. And the work we do for justice is not wasted.

When we first tried to pass legislation against bullying and school violence in 2002, we failed. It was only after building the Stop Bullying Louisiana coalition and working together with a number of progressive organizations, were we finally able to get something passed in 2012. It isn’t the bill we wanted but it is the start we can use to begin educating students and teachers about bullying.

Currently, I’m working with Forum For Equality on trying to pass the Louisiana Fair Employment Act. One LGBT organization alone will have no chance, in Louisiana’s political climate, to pass a bill protecting public employees from discrimination and bias based on sexual orientation or gender identity/expression.

Only by working together and building coalitions across the state can we ever hope to have a society free from discrimination. While our individual organizations might have quite different agendas, coalitions can bridge the divide by openly acknowledging our differences and working within the coalition to address areas of concern. Sometimes all it needs is a willingness to put aside our personal agendas to focus on the common good.

I want to thank Equality Louisiana for all the work y’all have done and continue to do to make Louisiana a better place to live. I am honored that you recognized me as a Louisiana Legend and I pledge to continue to fight for our rights!

by Mary Griggs, a Louisiana Legend