I really thought I was going to wake up this morning to the news that the National Guard had been called out in Alabama to enforce the decision of U.S. District Judge Callie V.S. “Ginny” Granade. She had ruled in January that Alabama’s prohibition on same-sex marriage was unconstitutional but she had put her decision on hold until Monday, February 9.

See, late on Sunday night, in defiance of her ruling and ahead of any ruling by the Supreme Court on the state’s appeal, Alabama State Supreme Court Justice Roy Moore, wrote a letter that banned judges from issuing same-sex marriage license. This, of course, comes after former Arkansas Governor Mike Huckabee’s repeated calls for nullification of the many, many court decisions in favor of marriage equality across the nation and the 36 states with marriage equality, as well as Texas Senator Ted Cruz introducing a Federal Marriage Amendment (supported by Louisiana’s Governor, Bobby Jindal).

My pre-bedtime thoughts were that we’re heading into a constitutional crisis. The last time we had so many elected leaders advocating illegal actions against change was during the fight for racial justice and school desegregation.

Let’s go back in time for a moment to that ugly period of United States history.

We can begin with the unanimous decision in Brown vs the Board of Education made on May 17, 1954. The Supreme Court stated,

We conclude that, in the field of public education, the doctrine of “separate but equal” has no place. Separate educational facilities are inherently unequal. Therefore, we hold that the plaintiffs and others similarly situated for whom the actions have been brought are, by reason of the segregation complained of, deprived of the equal protection of the laws guaranteed by the Fourteenth Amendment.

Things were tense, with states searching high and low for ways to delay implementation. On February 24, 1956 Senator Harry F. Byrd, Sr., declared a policy of Massive Resistance in Virginia against school desegregation. He said, “If we can organize the Southern States for massive resistance to this order I think that in time the rest of the country will realize that racial integration is not going to be accepted in the South.”

His call was immediately followed by the creation of the Southern Manifesto against school integration, which was signed by 19 senators and 81 members of the House of Representatives, including the entire delegations of the states of Alabama, Arkansas, Georgia, Louisiana, Mississippi, South Carolina and Virginia. 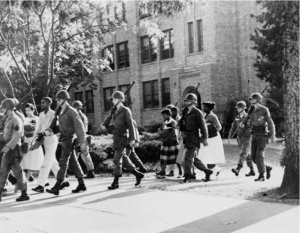 Things were coming to a head, with Arkansas seeing the 101st Airborne deployed to protect the Little Rock Nine after Governor Orval Faubus used his Arkansas Guard to block their entry and entire school districts being closed in Virginia.

While that decision didn’t make the rest of the Civil Rights Movement a bed of roses, it did give muscle to the original decision in Brown and it brings us here today to the battle for marriage equality.

When I woke today, I saw the Supreme Court had denied (by 7-2) Alabama’s Attorney General’s application for a stay (despite Justice Thomas’ three page dissent). The crisis is over for the moment and marriages are happening all over the state.

One of the best stories is coming from the northern part of Alabama where a Baptist minister has joined other clergy in Wedding Week (set up when probate judges were initially planning to refuse to issue licenses). Ellin Jimmerson is the Minister at Huntsville’s Weatherly Heights Baptist Church. Her reason was posted on her Facebook page and should be read in full:

As many of you know, Alabama has become the latest state to overturn the ban on same-sex marriages.
In particular, I want in this post to communicate with other Christian ministers and other Christians.
One of the issues for many is whether same-sex marriages comport with biblical ideas of marriages. The truth is that people in the 21st century would not be comfortable with the kinds of marriages which are represented in the Bible. For example, we would not be comfortable with the biblical model that is one man, one woman, one concubine. Nor would we be comfortable with the idea of a widow being compelled to marry her brother-in-law. There is very little in the Bible which reflects the modern idea of one man & one woman united by love. That is where we have been comfortable for a long time now.
Today, we are being asked to move even further down the road of marriages being based on love. We are being asked to expand our ideas to include one man and other man united in marriage by love. Of one woman and another woman united by love.
It was not too many years ago that we in Alabama at last understood that the long-held ban on interracial marriages was hurtful and wrong. We moved further down the road of love. Now, most of us think nothing of interracial marriages.
On Monday, February 9, the state of Alabama will move as a people even further down the road of love as the only legitimate basis for marriage. We as a people will recognize that God truly does love us all.
However, in the spirit of Governor Wallace standing in the school house door, the probate judges in Madison and surrounding counties have announced they no longer will perform any marriage ceremonies.
This means that same-sex couples, many of whom have no pastor because they have not been welcome in their own churches, would have had no where to turn had it not been for the good people who have organized “Wedding Week”.
During the week of February 9, a number of ministers have volunteered to officiate at marriage ceremonies for whomever needs one. There has been a wonderful show of support for couples, many of whom have waited years or even decades to have their relationship solemnized by way of license and ceremony, from people offering wedding gowns, cupcakes, bubbles, and photography. So many people want to celebrate with people who have waited too long.
I have been invited to officiate at the first ceremony and to offer a short inspirational homily to those gathered in downtown Huntsville Monday morning. I am deeply touched by the invitation and have agreed enthusiastically.
I want to invite everyone who will to celebrate with the couples who have waited so long for this day.
To God be the glory!
Ellin

It put tears in my eyes to read that and I put on my Ella Fitzgerald / Louis Armstrong rendition of Stars Fell On Alabama Last Night. Listen to a YouTube video here. The lyrics go:

I never planned in my imagination a situation so heavenly
A fairy land where no one else could enter
And in the center, just you and me
My heart beat like a hammer, my arms wound around you tight
And stars fell on Alabama last night