The Indian woman who was gang raped on a bus on December 16th died from her injuries. She and a male friend were traveling in a public bus in New Delhi after watching a film when they were attacked by six men who raped her. They also beat the couple and rammed an iron rod into her body resulting in severe organ damage. Both of them were then stripped and thrown off the bus, according to police. 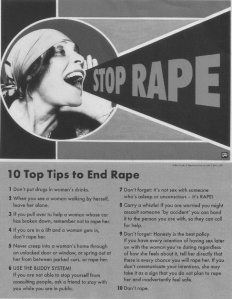 News also broke of the teenager who was gang raped in Punjab committing suicide after the police failed to act on her information and charge her rapists. Far from prosecuting the rapists, the police had been urging her to either accept a cash settlement or marry one of her attackers.

Here in the US, we have Sen. Eric Cantor holding up the Violence Against Women Act because of a provision that closes the loophole for non-Native men who sexually assault Native women. Tribal courts do not have jurisdiction to prosecute non-Indian defendants and federal and state law enforcement have limited resources and might be hours away from a reservation. According to a General Accounting Office report on “Department of Justice Declinations of Indian Country Criminal Matters,” federal prosecutors declined to take action on 52 percent of violent crimes committed on tribal lands. Of those declined cases, 67 percent were sexual abuse and related cases.

Rape and other sexual assaults are crimes of VIOLENCE. Sex is the rapist’s weapon to gain power and control, or express hostility, anger, and resentment towards women or society as a whole.

It is a myth that it matters what attire was worn, what drinks were consumed or how much, or how many previous partners she had. A Federal Commission on Crime of Violence study that found that only 4.4% of all reported rapes involved provocative behavior on the part of the victim whereas in murder cases 22% involved such behavior.

Why aren’t men insulted by the implication that their self control is so weak as to endanger any woman who walks down the street?

I would think they would be disgusted whenever they hear somebody suggest that they cannot restrain themselves from raping. Unless it true that men’s natural state is rapists and they lack any control over their penises.

Is it, guys? Is it really that hard to refrain from raping people?

There are one billion women who are rising in revolution against rape. Join V-Day on February 14, 2013 in a global strike to demand an end to violence.

I hope to see many men out there, too, standing up against a grievous wrong, interrupting their day to protest the rapists who are giving their gender a bad reputation. We are in desperate need of more men who will value women as equal human beings. I hope you are one of them.

And, if you’re not, please remember that the number one way to prevent rape is to stop raping people. Surely, you can do that!

Re-examining the Rudolph story and wondering why Santa didn’t step in earlier to teach the other reindeer that Rudolph is fine just the way he is and they should be celebrating differences instead of bullying him. It was great that his red nose was helpful that one foggy Christmas eve, but even if there was no utilitarian benefit to his nose, isn’t it time for reindeer society to learn to embrace diversity?

Twenty seven dead in a elementary school in Connecticut with twenty of them children between the ages of five and ten sure puts your day in perspective, doesn’t it?

That 18-wheeler going below the speed limit in the passing lane on Highway 90 at 6 o’clock this morning? Those crowds I had to battle at three different malls? That unopened 2L bottle of vodka I smashed on the driveway? On most days, I’d get to whine and complain about how bad my day was.

Today, you and I are not having a very bad day. You and I, we are lucky to be alive, to be loved, and to have something to complain about. No, this isn’t our bad day. Today’s bad day been taken by the families of those school children and those teachers who have lost a loved one.

And they didn’t lose their child or parent because the school day didn’t start with a prayer, as Bobby Fischer has claimed. The American Family Association demogauge said that God could have protected the victims of this massacre, but didn’t because “God is not going to go where he is not wanted” and if school administrators really want to protect students, they will start every school day with prayer. His words were echoed by Mike Huckabee later in the day when he blamed the violence on removing God from schools.

They lost their lives because the National Rifle Association wields far too much influence in politics. The NRA is decidedly against the obvious public safety concerns of the citizens. There have been at least 31 school shootings in the U.S. since Columbine happened 13 years ago and, instead of helping us be more responsible about guns, they advocate being armed in schools, daycares, churches, places where alcohol is served and at job sites. Such laws as well as Stand Your Ground legislation are wrong for the nation.

You want to know how much influence they have? Check here to see the money they’ve given to your elected representatives. In the 2012 election cycle, they gave $719,596.

I don’t have all the facts about today’s shooting in Newton, Connecticut but I know that December just got darker. And unless we take our country back from the NRA, I don’t see it getting better.

Thanks to Erica Abbott for tagging me for “The Next Big Thing!”

As part of the “Next Big Thing” blog hop, I respond to reader questions.

What is the title of your newest book?

Crash Stop was released by Bella Books in October 2012.

What genre does your book fall under?

What is the one-sentence synopsis of your book?

Two women struggle to make peace and find love amidst the corporate intrigue and life-changing challenges of the beautiful San Francisco Bay.

What is the longer synopsis of your book?

She didn’t want a workplace feud, but Gail Joiner isn’t going to let Lily Rush walk all over her. When pushed, she pushes back.

Their hostilities evaporate, however, when a shipping accident traps Gail’s daughter and Lily in a wrecked warehouse. Incredibly, Sierra escapes unscathed, but Lily’s injuries are severe.

Recuperation allows Gail and Lily to uncover common ground, but what-might-be is interrupted by a threat on Lily’s job as distribution director for the large tea importer. Gail, as human resources director, finds herself caught between Lily, their CEO and the new vice president who seems determined to oust Lily for reasons of his own.

How long did it take you write the book?

I wrote the majority of the book during National Novel Writing Month (http://www.nanowrimo.org) in November, 2007. That is when you try to write a 50,000 word novel in 30 days. I succeeded in reaching the number by the deadline but the story wasn’t completed until the next year. During editing, we also fleshed out a story line.

What inspired you to write the book?

I’ve always been intrigued by the idea of people who initially don’t get along who then fall in love. Most of the books on that theme didn’t seem particularly realistic to me and, while crashing a large ship into a San Francisco pier took a bit of author license, I do think that it gave my characters the needed opportunity for a second chance.

What else are you reading/recommending?

The Rainbow Awards just came out and there are plenty of great lesbian authors on the list that I will be checking out.