Turning on the television or radio these past few days has meant an inundation of media coverage of the 10th anniversary of Hurricane Katrina. There are memorial services, art shows, documentaries, public speeches, political theater and lots and lots of pictures. Pictures of suffering and loss, of courage and quiet dignity, of humor and protest, of life and death. I don’t know about the rest of you but it is triggering my PTSD.

I’m not ungrateful that the world has not forgotten the result of the post-hurricane levee breaks that devastated New Orleans — 1,800 dead, 1 million people displaced, 1 million homes damaged, 250,000 homes destroyed, and a cost of over $150 billion. It is the almost pageantry of the events surrounding this anniversary that raises my hackles and sinks me further into depression.

I’m going to do my mourning in private and use this blog post to talk about books and how their loss (and what I gained) led to my recovery.

Just a couple of months before the storm, I attended the inaugural Golden Crown Literary Society conference, held at the Renaissance Hotel along Tchoupitoulas Street in the Warehouse District of New Orleans. It was amazing to sit in the same room as many of the authors who not only had entertained and enlightened me but whose books helped me come out.

That might have been all it was except then came the storm.

I evacuated ahead of landfall, expecting to be back in my house in a few days. As it was, it took a month before my neighborhood opened for me to make a trip over there to see for myself what the floodwaters had wrought.

My house is raised up three feet off the ground, so I only had a few feet of water inside. It was enough to wreak havoc on my books, though. You can see in the first picture the water level in this area of the house was recorded in the wood of the bookcase itself.

As the books soaked up the water, the pressure pushed on the sides of the case, dropping shelves of books that were above the waterline into the water (as seen on the left of this picture).

Mold covered the books that escaped the waters or the falling. Paperbacks were the hardest hit, with some of the mass market paperbacks almost melting away.

I couldn’t help the tears. And, let me tell you, crying in air mask is not recommended by the manufacturer or fun for the wearer.

There was a citywide curfew, so my Dad and I took only pictures and left only footprints before closing up my home and making the three-hour trip back to their house to regroup.

Sitting in what would be my temporary home for the next ten months, I saw that someone from GCLS had forwarded me an announcement from the board. It read in part:

In light of the truly devastating effects of Hurricane Katrina, the board of the Golden Crown Literary Society (GCLS) has established a special GCLS Relief Fund. This fund, to be administered by the GCLS Advisory Board, will take donations from the public on behalf of all those authors, publishers, and supporters in our community who have been affected by the storm.

I found out later that in less than 48 hours of the relief fund being set up, they raised $7000. I don’t know the final numbers of monies dispersed but I was a grateful recipient. I want to thank all who donated because those funds were crucial to my rebuilding.

But that wasn’t the end of it.

I missed the next conference as I was across the country, in California. When I made it to the 2007 conference, many of the friends I made the first year remembered me and remembered New Orleans.

Some of those folks went beyond simple hugs (although those were nice, too). Lee Lynch and her then partner (now wife) Elaine Mulligan donated books from their private library to help me rebuild mine.

I cried when I opened the box and saw books that I hadn’t been able to find because they were out of print or the publisher no longer existed. Even in the San Francisco Bay Area, lesbian novels aren’t easily found in used bookstores. I had despaired finding many of the books which marked milestones in my life. I have always been a voracious reader and much of my development from questioning teenager, to baby dyke, to fully fledged lesbian activist can be attributed to the possibilities I first glimpsed between those pages.

Lee and Lainie weren’t the only ones who opened their hearts (and, sometimes, their libraries) for me. I received other boxes but, even more importantly, I gained the great gift of friendship from so many of the participants and attendees at that conference and every subsequent one since then.

I was so pleased to be able to be a part of bringing the 2015 conference back to New Orleans. I hope those who came caught a glimpse of the mystique of New Orleans which endures despite the tragedy of the post Katrina levee breaks.

It is the spirit of a city and its people that makes a city what it is. A disaster cannot kill the creative spirit, the zest for life, or the abundance of hospitality that makes me proud to call this city my home.

And it is that love and spirit that embodies so many of the members of the Golden Crown Literary Society. It is why I am proud to be a member and why I would encourage anyone who cares about lesbian literature to become a member and to attend the conference as you are able.

All of us deserve to thrive; to bring our fullest, most vibrant versions of our selves into the world. Transphobia makes that impossible for many people.

Chai Jindasurat, Co-Director of Community Organizing and Public Advocacy at the New York City Anti Violence Project said, “In all of 2014 we documented 12 homicides of transgender women in the U.S. We have alarmingly already reached that number in 2015 – and it is only August.”

The transgender women we have lost in 2015 include:

I don’t usually quote the Human Rights Campaign on trans issues but I agree with what HRC President Chad Griffin has said, “The level of violence targeting transgender people, particularly transgender women of color, is a national crisis that the LGBT movement has a responsibility to confront.”

In order to confront transgender oppression, we must become partners with our trans brothers and sisters. Educate yourself and pledge to be a trans ally (GLAAD, PFLAG, GLSEN). We must understand what we are fighting against and who we are fighting for.

Here are some immediate things you can do:

Join the fight for gender identity and expression inclusion in non-discrimination laws. One organization I’m active with (Forum for Equality) is working for passage of the Louisiana Non-discrimination Act (LANA) which would add sexual orientation/gender identity and expression to over 60 current Louisiana non-discrimination statute provisions. There are also many organizations which are working to pass The Full Equality Act of 2015 which covers eight major areas of discrimination law under which LGBT people are currently not federally protected: public accommodations, public education, employment, housing, federal funding, jury service, legal protections, and credit. In addition, the bill would amend the 1964 Civil Rights Act to include sexual orientation and gender identity among the other protected classes.

Tell yourself: None of this ever had to happen. And then go make it stop, with whatever breath you have left. Grief is a sword, or it is nothing.

The time is now. The place is here. The ones who must are us.

I love this from Scribed Proofreading and Editing:

Despite the recent videos by an anti-abortion group (which was fraudulently set up and is itself being investigated) against Planned Parenthood being illegal recorded, highly edited and misleading; despite the US Senate failing to defund them (thanks to Democrats!); despite DHH’s entirely politically motivated investigation (here is the PP response); despite Planned Parenthood not even providing abortions in Louisiana, he has taken it upon himself to terminate the Medicaid provider contract with them.

His stated reason for termination reads: “Planned Parenthood does not represent the values of the people of Louisiana and shows a fundamental disrespect for human life. It has become clear that this is not an organization that is worthy of receiving public assistance from the state.”

Bobby Jindal exemplifies the definition of snollygoster: A politician who will go to any lengths to win public office, regardless of party affiliation or platform.

Let me be totally clear: Planned Parenthood offers family planning services, cervical exams and gynecology services to women in Baton Rouge and New Orleans. No abortions are done by the Louisiana facilities but they do provide life saving screenings for STD’s and cancer as well as affordable contraceptives.

As this graphic from them shows, nationwide they provide essential services to women and their families: Defunding Planned Parenthood will inevitably result in more unplanned pregnancies and, as a consequence, more abortions, not fewer. While there are a handful of women in both the House and Senate who are fighting to defund Planned Parenthood, this has, unsurprisingly, been a conversation dominated by men. To me, it is morally reprehensible for anyone to tell women what they should do with their bodies – and it’s a debate that men have absolutely no business having without women at the table.

One in five women have visited Planned Parenthood clinics for health care. I know I have. The care they offer is affordable and a damn lot more respectful than most other health providers I’ve seen!

Katha Pollitt asks a good question: Are we going to allow extremists control the discourse and dictate the agenda around reproductive rights, medicine and scientific research?

Extremists, I might remind you, who operate through fear-mongering, who spread misinformation and lies, who will use false documents to spy and break the law in pursuit of a provider of safe and LEGAL medical procedures! Extremists who threaten contractors who dare take legitimate paid work to help build the New Orleans clinic? The ones who would vandalize the construction site?

Or are we going to #StandWithPP? 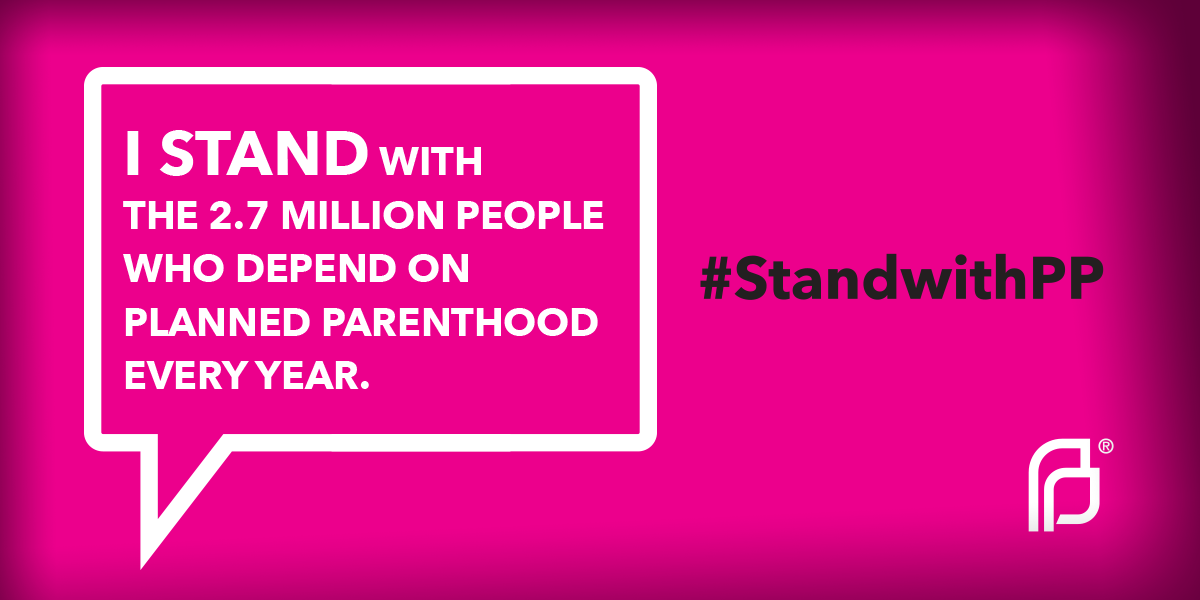 We can no longer afford to be silent. Anyone who has used Planned Parenthood services can no longer let fear or shame keep us quiet. As we have seen, our silence will not protect us!

We must vote against these politicians who would rather make political hay than protect the health of women.

Exercise your right by voting in primary and general elections. In Louisiana, the next elections will be the Gubernatorial primary voting on Oct. 24, 2015 and the Nov. 21, 2015 general election.