How will you be spending the Fourth of July?

Me? I will be reading a portion of the Mueller report. The readings will run from 6am on July 4th until 2am on July 5th. My reading time is scheduled for 6pm. Event organizer, Michael Martin, will perform the report’s redactions as Russian folklore character Baba Yaga.

There will be music, food and drink available throughout the day. The Facebook event is HERE 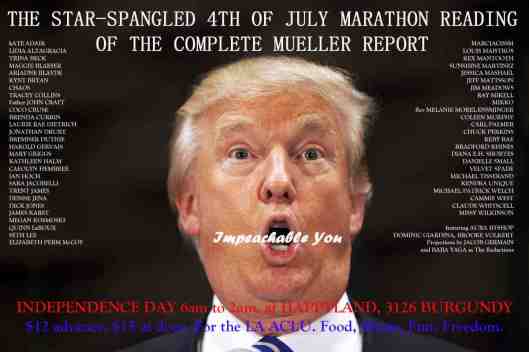 This event is a benefit for ACLU Louisiana. Tickets are $12 in advance and $15 at the door. Buy tickets at : impeachableyou.brownpapertickets.com

We got a write up in Gambit!

I hope to see you there for food, music, fun and freedom!

During the 2019 Legislative Session that ended on June 6, Louisiana Governor John Bel Edwards signed a bill that will prohibit an abortion after six weeks, before many women even know that they’re pregnant.

His signature on the misleadingly called heartbeat bill came after legislators in the Louisiana Senate voted 31 to 5 in favor of the bill and the Louisiana House voted 79 to 23 to pass measure. In both the Senate and House, the measure passed with the support of more than a dozen Democrats (and it was authored by a Democrat, too).

Lawmakers, including the author, rejected amendments that would have added an exception to the ban for cases of rape and incest. Perhaps its one saving grace is the law will only go into effect if a federal appeals court upholds a similar law in Mississippi

Worst of all, the bill is meaningless and duplicative. Back in 2006, then Louisiana Governor Kathleen Blanco signed an act to ban abortions, with the only exception being when a mother’s life is in danger. That Act will go into immediate effect if the Supreme Court reverses the 1973 Roe vs Wade decision. By the way, Act 467 was also authored by a Democrat and passed the Louisiana House with a vote of 85-17 and the Senate with a vote of 30-7. Blanco, too, is a Democrat.

Further, voters will also be asked to amend the constitution in November 2020. HB 425 would change the state constitution to say there is no right to an abortion. That bill was authored by Democrat Katrina Jackson and passed with overwhelming majorities in the House (81-10) and Senate (31-4), including a number of Democrats.

Because Louisiana is already one of four so-called “trigger” states that already have passed legislation that would outlaw nearly all abortions, I can’t help feeling that current attacks on abortion are less about protecting life than a cynical plan to force Louisiana’s Democratic governor to either lose his base of supporters in metro areas with a signature or to lose the rest of the state with a veto.

The Machiavellian strategy behind this bill could cost us a governor who brought medicaid expansion, criminal justice reform including reducing prison populations and unanimous juries, domestic violence reform, teacher pay raises and educational improvements, an executive order protecting LGBTQ public employees from discrimination and a budget surplus to our state.

Those are gains for all Louisianans. A Republican governor would most certainly roll back what John Bel Edwards has achieved.

Unfortunately, I can’t dismiss what happened as just some evil plot foisted on the women of this state by the GOP because these bills were written by Democrats, voted on by both Democrats and Republicans and signed by a Democrat. I can’t put this entirely on male legislators who devalue a women’s bodily integrity and decision making ability because women were involved in every aspect of getting the pro-birth bills from this legislative session passed.

I could put it on a fiercely anti-scientific bias (Milkovich, the heartbeat bill’s author, said on the Senate floor, “Many of you may know some of the leading researchers in America say that autism is a result of vaccination. Did you know tissue from aborted babies is now used in vaccines. Did you know that vaccines use aluminum which is shown to be a neurotoxin? Did you know vaccines in America is preserved often with mercury, which is beyond neurotoxic?”) because a six week fetus is not a baby and it does not have a heartbeat: 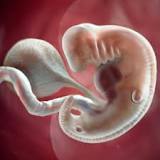 At six weeks’ gestation, there is only a “fetal pole,” an area alongside the yolk sac that extends from one end of an embryo to the other. It for damn sure should not have more rights than the breathing, thinking, voting woman who is carrying it.

While I would have liked to see John Bel Edwards at least have sent the bill back to the legislature asking for exceptions for rape and incest, I also knew what I was getting when I first voted for a pro-life candidate for governor. As someone who has personally benefited from Medicaid expansion, I will be voting for him again this Fall.

I support the national Democratic party platform – every woman should have access to quality reproductive health care services, including safe and legal abortion. I just wish more Louisiana Democrats did as well.

Therefore, I will work to elect more pro-choice and women candidates across the state. Because someday, maybe not tomorrow but soon, there will be hell to pay.