The federal government had a plan to vaccinate 20 million people by Dec. 31 but only managed to have 3 million inoculated when the clock struck 12 that night.

At least 2,373 new coronavirus deaths and 291,384 new cases were reported in the United States on January 2nd. Over the past week, there has been an average of 205,840 cases per day, a decrease of 5 percent from the average two weeks earlier. As of Sunday evening, more than 20,661,700 people in the United States have been infected with the coronavirus according to a New York Times database.

Went for a walk on the beach as we’ve had a high surf advisory for the past few days. Got some shells and some cool pictures of birds. The fisher folk call the Great Blue Herons that stalk them as they fish and steal bait and even fresh caught fish Fred. 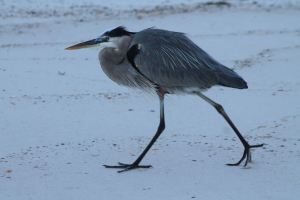 We enjoyed charbroiled shrimp on the grill. Recipe here. I also grilled a box of hamburger patties so we will have those for upcoming meals.

Watched the Saints beat the Carolina Panthers to become the first team in the history of the NFC South to sweep their regular season divisional games. Who dat!

1 in 16 Americans has tested positive for Covid-19. The US has 4% of the global population and 31% of the coronavirus cases. The US has more cases than any other country in the world and it is the only country for which COVID-19 is the leading cause of death.

January 4 – Today, the Louisiana Department of Health reported the highest number of COVID-19 hospitalizations since April 16.

I got up at 5am to start the charcoal for cooking a beef brisket that I bought at Winn-Dixie on Saturday. After 7 hours it reached 205 degrees so I brought it inside, wrapped it in aluminum foil and a towel let it rest for 3 hours. Turned out juicy and flavorful. This is the method I used – https://mouthbrothels.wordpress.com/2020/05/02/frontyardcookout-beef-brisket/

January 6 – The United States reported at least 3,805 coronavirus deaths on Wednesday, the highest number of new deaths in a single day since the pandemic began.

Later in the day, chaos erupted at the Capital after Trump incited a riot against Congress. A white mob of MAGA and Trump supporters broke through the barricades and forced the Legislators working to certify the presidential election to flee for safety. It took to 8pm for enough order to be restored to return to counting the electors ballots.

Around 4 am, Congress affirmed President elect Joe Biden’s electoral college victory over Trump. Instead of conceding, Trump spread more lies in his statement:

“Even though I totally disagree with the outcome of the election, and the facts bear me out, nevertheless there will be an orderly transition on January 20th. I have always said we would continue our fight to ensure that only legal votes were counted. While this represents the end of the greatest first term in presidential history, it’s only the beginning of our fight to Make America Great Again!” https://twitter.com/DanScavino/status/1347103015493361664

January 8 – The first week of the New Year brought new records for the pandemic in the U.S. On January 7, the country for the first time surpassed more than 4,000 deaths in a single day. And this week alone, nearly 1.6 million people across the nation tested positive for the virus, higher than any other week yet recorded. Hospitalizations rose to a record-setting 132,370 cases, continuing to strain already fatigued health-care workers. Concerns about hospital capacity remain at crisis levels, as ICU beds run short in many states, particularly Alabama, Georgia, New Mexico, Oklahoma, Rhode Island, and California.

My sister and her husband brought fried chicken over for dinner. They spent the night so we could go look for shells on the seashore.

My sister, brother-in-law and I walked on the beach this morning. Just a few birds, mainly two Great Blue Herons who posed for pictures.

Tried to make pancake sticks stuffed with sausage but it wouldn’t release from the pan so we ate pancake coated sausages.

I did two loads of clothes, cleaned out the fireplace and packed as I will be heading to Michelle’s house tomorrow morning.

Drove to Michelle’s house and took her grocery shopping. Once home we reorganized her outside chest freezer and I gave her some space by sorting through some machine picked blueberries that her aunt had given her. I also made sourdough rolls (recipe here ) for us to have with leftover, reheated crab imperial.

Took Michelle to drop off her property taxes and to another grocery store. They were getting rid of an entire case of bananas which were getting brown and spotted. As she has a Nutra-bullet, she is making lots of smoothies so she took the case home and placed it in the freezer. Now, she will have bananas for a lot of smoothies.

I drove the rest of the way to New Orleans and was in time for my 1pm zoom with the Vera Institute about criminal justice issues on which IWO can partner with them.

Lawmakers were likely exposed to the coronavirus as they sought safety together in a room when a pro-Trump mob stormed the U.S. Capitol, the attending physician to Congress said. Video showed several Republicans refusing masks offered by a colleague in the hideout room Wednesday. Rep. Bonnie Watson Coleman (D-N.J.), a 75-year-old cancer survivor, has tested positive after sheltering in the room.

Ran a number of errands today including getting money to the rental place handyman, getting the tenants new a/c filters, going by the post office and checking on friends that I hadn’t heard from in a while.

My handyman came out with two guys to continue the work on my house. They were able to finish insulating the water pipes under the house (my house is on three foot risers meaning there is lots of cold air under the house and, with me back and forth to my folks, my house is going through the winter without the usual amount of heat coming from inside) and fixing the rails on my front porch. They still need to fix the back porch and stairs but have promised to finish by Friday.

Around 5pm yesterday, the House of Representatives passed the number of votes necessary to impeach Trump. In the end, 232 Representatives—222 Democrats and 10 Republicans—agreed that the president had incited an insurrection and must be removed from office. 197 Republicans disagreed and voted against Trumps second impeachment.

New Orleans Director of Health Dr. Jennifer Avegno said, “There is light at the end of the tunnel with vaccines underway in Louisiana, but vaccines only work for those who are alive to receive them.”

I worked in the yard – sweeping, raking, trimming, mowing until I filled my compost area and a trash can with yard waste.

I got up early to go look at the sunrise above New Orleans. It started out as a great day, with the Superdome in the center of the picture.

Unfortunately, the Saints were unable to keep up their winning streak against the Tampa Bay Buccaneers and have been eliminated from contention for the SuperBowl. It also looks like that might have been Drew Brees last game.

I spent a lot of time today going onto politicians’ Twitter feeds and responding to their MLK day posts with plenty of snark for those who have worked against all he stood for.

January 19 – Today, on the last day of Trump’s administration, the number of Americans lost to Covid-19 has topped 400,000. That’s about the same number of people we lost in World War Two.

I got up before sunrise to go down to Lafayette Square to take pictures of the 700 white flags planted there to commemorate the lives of New Orleanians lost to COVID-19.

While there with Charlotte and Thomas, I was interviewed on Fox8 for the morning broadcast – see it here.

Inauguration day! I drank vodka, champagne and orange juice called an absolute screw you as Trump left the White House. I switched to just champagne and OJ while Biden was sworn in and during his speech. 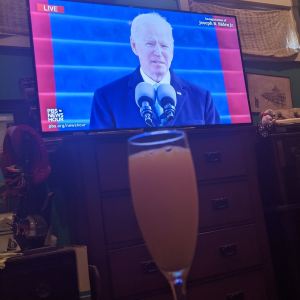 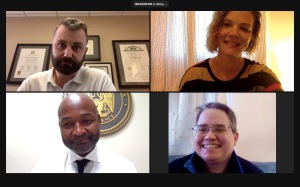 Drove over to Gulf Shores. The uptick in traffic shows that more people are on the move, despite Alabama’s Governor’s Safer at Home order, that she just extended to March 5th.

I went to my parent’s old house to give the refinishers dad’s desk that belonged to his grandfather and the round flour drawers of an old pie safe that belonged to mom’s grandmother. The rest of the pie safe just needed cleaning but the water rotted through the thin, bent wood of the drawers.

My parent’s signed the paperwork for their new house in northwest Foley yesterday. This morning, we went to measure walls and things of my parent’s new house

I went for a walk on the Ft Morgan public beach.

Started to set up the kitchen in their new house. Figure it will take me a week to get to all the boxes and arrange things. Began with pulling five boxes of their household goods out of one of the storage units.

Went to one of the storage units and filled my car with boxes so I could have something to unpack today and tomorrow when there are workers and deliveries scheduled.

Was at the new house while the plumber replaced the toilets and then for my parent’s new mattress to be delivered. Was able to run 4 dishwasher loads and empty six boxes.

January 30 – 1 year ago today, the WHO Director-General declared the novel coronavirus outbreak a public health emergency of international concern (PHEIC), WHO’s highest level of alarm. We have now reached 2,217,579 global deaths (of which 439,347 are US deaths).

It is only fitting I post this picture and poem

Pile the bodies high at Austerlitz and Waterloo.
Shovel them under and let me work—
I am the grass; I cover all.

I am the grass.
Let me work.

My sister, her husband and I went to my parent’s house to do some work. Unfortunately, the drill wasn’t charged so we couldn’t put the brackets for the new bed onto their old headboard but we got the bathroom door off and more of the kitchen organized. The door handle they bought needed to be returned and the rekeying didn’t happen so we will try again.

Mom has been out and about more these past two weeks than in the entirety of last year with finalizing the mortgage paperwork, signing for the title and shopping for beds and appliances. She has come down with a bad case of congestion and has a hacking cough. Fingers crossed that it is nothing more than a cold. In other news, my niece was exposed to COVID-19 by her housemates child, who has now been hospitalized. She took the rapid test and is negative but will retest again to be sure.