I’ve got to admit that I don’t understand the anger and controversy over wishing someone happy holidays. As someone who works part-time in retail, I can report that it has gotten pretty tense out there in the greetings department.

I usually respond with whatever the person says to me. If I’m initiating the good wishes, I say Happy Holidays. I’m not trying to take Christ out of Christmas by doing so. I’m simply recognizing that there are other celebrations during December and I don’t want to assume that everyone I interact with is a practicing Christian.

Here are a few of the other December holidays:

Heck, if we took out all the Jews, Arabs and Africans from the birth of Christ, it would look like this: 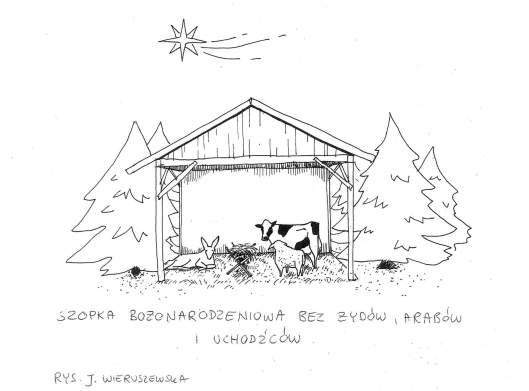 To those that say this is a Christian nation and we shouldn’t worry about being politically correct, I respond that the Christian thing to do is respect the Other among us.

The bible is filled with passages about being welcoming to strangers (Genesis 19, Leviticus 19:34). Jesus himself was pretty clear about it, too. Give a reread to Matthew 25:31-45:

31 When the Son of Man comes in his glory and all the angels are with him, he will sit on his glorious throne. 32 All the nations will be assembled in front of him, and he will cull them out, one from another, like a shepherd separates sheep from goats. 33 He will put the sheep on his right but the goats on his left.

40 The king will answer them, “I tell all of you with certainty, since you did it for one of the least important of these brothers of mine, you did it for me.”

44 Then they will reply, “Lord, when did we see you hungry or thirsty or as a stranger or naked or sick or in prison and didn’t help you?”

If you want to do the Christian thing, just be kind to everyone.

And, please, please, don’t be mean to those minimum wage employees in the stores and restaurants you frequent. Most of them are required by their employers to use specific greetings. Instead of reacting badly to either Happy Holidays or Merry Christmas, put a smile on your lips and in your heart and return their good wishes.

That is the true spirit of the season.

The title of this piece comes from Hebrews 13:2 – “Forget not to show love unto strangers: for thereby some have entertained angels unawares.”